I started off my new crochet project using a Caron Cake and no pattern. I had to find a pattern that would work well with it. I ended up selecting Simple Crochet Shawl designed by Teresa Chorzepa. In order to be able to use the pattern with 1 Caron Cake, I had to modify the pattern slightly. 1 Caron Cake has 383 yards and the pattern needed 570 yards. What I ended up doing is eliminating 1 repeat of 4 that contained 6 rows. So, instead of  Rep Rows 4-9 for 4 more times, I Rep Rows 4-9 for 3 more times instead. Problem solved!

While I crocheted my new project, I took notes of several things. First, I pulled the yarn from the middle. That ended up being a really good choice. Often when I have used Simply Soft Caron and pulled from the middle, the yarn tends to untwist and become challenging as it unraveled. With the Caron Cake, the yarn did not behave that way and stayed together. Also, I found the yarn grabs onto my hook easier than Caron's Simply Soft yarn and making it easier to manage. I believe this was due to the mixture of wool and acrylic.

I was really curious about the color changes. I had heard that the change was abrupt. I can confirm it was definitely abrupt. The join seemed to be a hit or miss at the color change. I had one join tied as a knot and another join that did not require a knot.  I am never happy when I come across a knot in my yarn. Sometimes those knots aren't the greatest and they need to be taken out and rejoined to the project.

As the Caron Cake became used, it was wound the same way as any other skein of yarn you buy from the store. It just happened to be in a cake shape instead of the typical tube shape. I had expected it to unwind more like a hand wound skein of yarn.

Overall, I think that the yarn is pretty good, but it has some room for improvement. I would likely use it again for another project. I have yet to decide whether I should block the finished product or leave it be. Because it has wool, it could possibly benefit from blocking.

Viewing the project from a distance, there is a color change that catches my eye between the grey and the cream. Overall, I believe it looks pretty good!

Email ThisBlogThis!Share to TwitterShare to FacebookShare to Pinterest
2 comments:

I belong to a lot of facebook groups, pages, blogs, etc to keep current on the latest and greatest crochet trends. It takes quite a bit to catch my eye, so when Caron Cakes entered the scene, it really stuck out to me.

I believe crocheters and knitters alike have been winding their yarn into cakes for a very long time. I have also purchased yarn in cakes with gradual color changes at yarn shops and conferences. The Caron Cakes have an abrupt color change.  I had yet to see yarn cakes done with well known brands that are sold in big box stores. Color me yarn excited!

Caron Cakes are currently sold at Michaels, so I made a trip out to Vernon Hills to see what they had to offer. When I got there, they had an end-cap of all their colors towards the back corner of the store. My first impression was that they are much bigger in person than they looked in the photos on the internet. Below is a photo of my haul. I put the standard sized adult coloring books in the background to put perspective on the size of the cake. 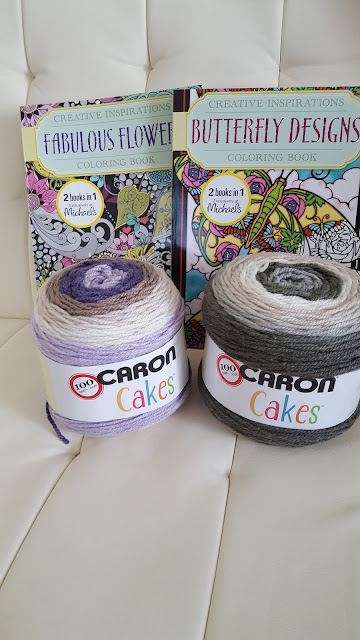 Here's some additional information found on the label below.

The Crochet Crowd has made several recommendations on patterns to try out using this type of yarn. Clicking on the photo will take you to their webpage with the recommendations. 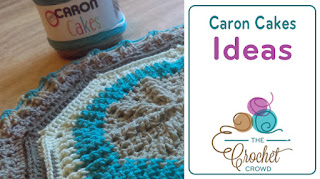 In the next few weeks, I plan on trying out this yarn with one of the recommended projects. Stay tuned for the next post, Caron Cakes Part 2. Hopefully we will be able to answer such questions as


Til then!
Labels: Caron Cake, crochet
Posted by Breanne Garman at 1:45 PM

Visit us on Ravelry

Crocheters of the Lakes

Promote your Page too