For the last three months, we've been kicking up our heels and crocheting the Basic Sock by Nicole Cormier with COTL member MaryLokay. A huge thank you to Mary for walking us through the heels, toes, gussets and legs and helping many of us finish our first pair of socks. 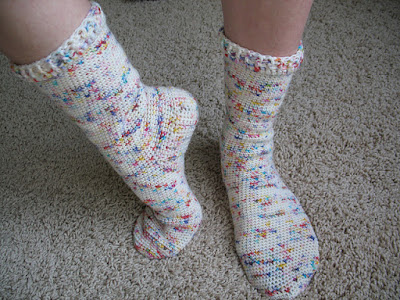 
Now it's time for your second pair of socks!

I took a look through Ravelry and found 10 free crochet sock patterns that would be fun to try the next time you want to make socks.

Toe Up Socks (crochet) by Patons


Which pattern will you use for your next pair of socks? Share it with us in our Ravelry group!

Join Us in June!

In June, we will be doing a hook tasting. Bring the hooks you love to use for others to try and try out the hooks of others love!

Our meeting is Monday, June 10, 2019 at State Bank of the Lakes in Grayslake (50 Commerce Dr, Grayslake, IL 60030). The doors open at 6 PM for those who would like to socialize and get a little help with the project on their hook. Our business portion of the meeting begins at 7 PM with our program that follows. All meetings close out with show and tell, so bring a crochet project (or two) to share with everyone so we can ooooh and aaaaahh!

Want to visit with us before joining? Visitor fees are $3 but a full year's membership is just $15 (such a bargain!!). We hope you'll join us and celebrate all that is crochet!

Email ThisBlogThis!Share to TwitterShare to FacebookShare to Pinterest
No comments:

The buzz of CGOA is in the air. What is CGOA you ask? It stands for Crochet Guild of America and they offer a huge Conference each year for crocheters. Those in Crocheters of the Lakes and other crochet fans in the northern Illinois area are particularly excited because this year’s CGOA conference is taking place in Chicago! The CGOA Chain Link Conference will be held from July 26th-July 29th and will feature a variety of classes by amazing crochet teachers, a huge vender hall, and a lot of crochet comradery. As more information becomes available, I will let you know. 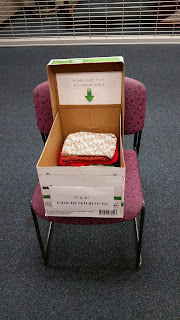 As we rev up for the Chain Link Conference, CGOA has brought back the chapter challenge. Per CGOA’s website; the challenge is to create as many 7” x 9” rectangles as you choose for lapghans for Warm Up America by June 30th 2017. The squares will be counted up in ratio to the amount of members in a chapter so all chapters can participate evenly. Once there are enough squares, they will be joined up into lapghans and contributed to the charity of our chapters choosing. So, if you have a little time to spare, why not whip up a rectangle. You can crochet 1 or 100, it’s up to you! 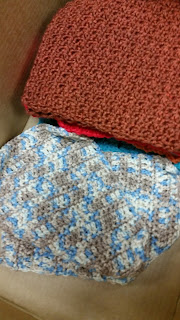 For fun patterns, visit warm up America’s Website: The Challenge: http://www.warmupamerica.org/patterns.html Vicky Finch-Martin
Posted by Crocheters of the Lakes at 11:35 AM

Email ThisBlogThis!Share to TwitterShare to FacebookShare to Pinterest
No comments:

I started off my new crochet project using a Caron Cake and no pattern. I had to find a pattern that would work well with it. I ended up selecting Simple Crochet Shawl designed by Teresa Chorzepa. In order to be able to use the pattern with 1 Caron Cake, I had to modify the pattern slightly. 1 Caron Cake has 383 yards and the pattern needed 570 yards. What I ended up doing is eliminating 1 repeat of 4 that contained 6 rows. So, instead of  Rep Rows 4-9 for 4 more times, I Rep Rows 4-9 for 3 more times instead. Problem solved!

While I crocheted my new project, I took notes of several things. First, I pulled the yarn from the middle. That ended up being a really good choice. Often when I have used Simply Soft Caron and pulled from the middle, the yarn tends to untwist and become challenging as it unraveled. With the Caron Cake, the yarn did not behave that way and stayed together. Also, I found the yarn grabs onto my hook easier than Caron's Simply Soft yarn and making it easier to manage. I believe this was due to the mixture of wool and acrylic.

I was really curious about the color changes. I had heard that the change was abrupt. I can confirm it was definitely abrupt. The join seemed to be a hit or miss at the color change. I had one join tied as a knot and another join that did not require a knot.  I am never happy when I come across a knot in my yarn. Sometimes those knots aren't the greatest and they need to be taken out and rejoined to the project.

As the Caron Cake became used, it was wound the same way as any other skein of yarn you buy from the store. It just happened to be in a cake shape instead of the typical tube shape. I had expected it to unwind more like a hand wound skein of yarn.

Overall, I think that the yarn is pretty good, but it has some room for improvement. I would likely use it again for another project. I have yet to decide whether I should block the finished product or leave it be. Because it has wool, it could possibly benefit from blocking.

Viewing the project from a distance, there is a color change that catches my eye between the grey and the cream. Overall, I believe it looks pretty good!

Visit us on Ravelry

Crocheters of the Lakes

Promote your Page too